Amarnath Cave is a Hindhu Shrine Located at Jammu&Kashmir at an altitude of 3,888 m, about 141 km from Srinagar. The Shrine is one of the most important shrines in Hinduism as it is one of the 18 Maha Shakti Peedhas (highly revered temples throughout South Asia  that commemorate the location of fallen body parts of the Hindu deity Sati Devi)

The Yajurveda describes Shiva as an ascetic warrior Whose robe is of Deer Skin and He carries Trishul. According to the verse Satyam, Shivam, Sundaram, life is described as having three facets Truth (Satyam), Good (Shivam) and the Beautiful (Sundaram). Shiva is a living God. The most Sacred and ancient books of India, the Rig Veda narrates His presence in the hymns. Vedic myths, rituals, and even astronomy testify to His existence from the dawn of time. The Mohinjodaro and Harappa findings confirm Shiva worship in ancient India. According to the older scriptures, He has three places of His residence. One is  Kailash Parvat another is Lohit Giri under which the Brahmaputra flows and third is Muzwan Parvat. 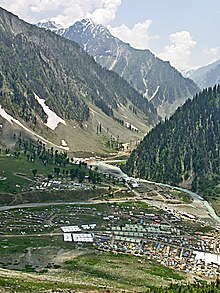 Inside the 40 m (130 ft) high Amarnath cave, a stalagmite is formed due to freezing of water drops that fall from the roof of the cave on to the floor and grows up vertically from the cave floor. It is considered to be a Shiva Linga by Hindus. It is mentioned in the ancient Hindu texts of Mahabharata and Puranas that Lingam represents Lord Shiva. The Lingam waxes during May to August, as the snow melts in the Himalayas above the cave and the resultant water seeps into the rocks that form the cave and gradually wanes thereafter. As per religious beliefs, it has been claimed that the lingam grows and shrinks with the phases of the moon reaching its height during the summer festival, although there is no scientific evidence for this belief. According to Hindu religious beliefs, this is the place where Shiva explained the secret of life and eternity to his divine consort, Parvati.

Discovery Of The Holy Shrine

The story narrated by people about the discovery of this Holy Cave is of a Gujjar ( shepherd) Buta Malik. He is given the credit of discovering this Holy Cave. The story goes like this, that a saint gave Buta Malik a bag full of Coal. On reaching his home when he opened the bag, to his utter surprise the bag was full of gold coins. This made him overwhelmed with joy. He ran to thank the Saint. But,  what he found was that the  Saint had disappeared. Instead, he found  The Holy Cave and Shiv Lingam therein. He announced the discovery of this to the Villagers. Then onwards this has become the sacred place of Pilgrimage. 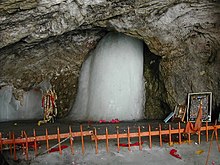 The ancient epics narrate another story that goes like this. The valley of Kashmir was underwater. It was a big lake. Kashyap Rishi drained the water through the number of rivers and rivulets. In those days Bhrigu Rishi came that way on a visit to The Himalayas. He was the first to have Darshans of this Holy Cave. When people heard of the Lingam, Amarnath for them became Shiva’s abode and a Centre of pilgrimage. Since then Lacs of devotees perform the pilgrimage through tough terrain and avail eternal happiness.
The trek to Amarnath, in the month of Shravan ( July–August) has the devout flock to this incredible shrine, where the image of Shiva, in the form of a Lingam, is formed naturally of an Ice Stalagmite, which waxes and wanes with the Moon’s cycle. By its side are fascinating, two more Ice Lingams, that of  Maa Parvati and of their son, Ganesha.

Devotees travel on foot, either from Srinagar or from Pahalgam.

The State Road Transport Corporation and Private Transport Operators provide regular services from Jammu to Pahalgam and Baltal. Also, privately hired taxis are available from Jammu & Kashmir. The shorter northern route is just about 16 km long, but has a very steep gradient and is quite difficult to climb. It starts from Baltal and passes through Domel, Barari, and Sangam to reach the cave. The northern route is along the Amarnath valley and all along the route, one can see the river Amaravati (a tributary of Chenab) which originates from Amarnath Glacier.

The Famous Ambubasi Mela in 2021