Swadesi - Marketplace for quality products from India.
USA
Cart ( 0 )
You have no items in your shopping cart.

Dating back to the time of Indus Valley Civilization, Dhokra is one of the most ancient crafts known to mankind and also the earliest known method of non-ferrous metal casting. Particularly famous in the state of West Bengal and Odisha in India, Dhokra uses the lost-wax technique to cast non-ferrous metal into fascinating figurines and other artifacts. The legendary dancing girl of Mohenjo-Daro is one of the earliest known lost-wax artifacts found, processed in around 2300-1750 BCE, in one of the earliest human cities, Mohenjo-Daro (present in modern-day Pakistan).

Dhokrian art is in great demand, in domestic and foreign markets because of it’s intrinsic simplicity, enchanting folk motifs, forceful form and varied utilization. These figurines fashioned from bronze and copper alloys, can take up to a month or two at the least to be created, as the process of making them involves various stages. The first stage in the process of lost wax hollow casting consists of developing a clay core which is slightly smaller than the desired artefact. Then, after it is left to dry in the sun, the clay core is covered by a layer of wax, that is the desired thickness of the artefact and is composed of pure beeswax, resin from the tree “Damara orientalis”, and nut oil. The wax is then coated in a thin layer of clay and shaped and carved in all its finer details of design and decorations. After this clay layer dries, it is then covered with numerous layers of clay subsequently, which take the negative form of the wax on the inside, thus becoming a mold for the metal that will be poured inside it. It is then heated in order for the wax layer to melt. 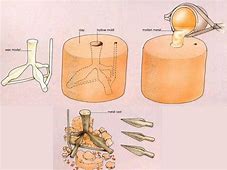 Once the wax has been drained off, the molten metal is poured into the cavity through multiple channels, often using brass scrap as basic raw material and left to take the shape of the clay mold. When the metal has cooled off and dried, the clay mold is broken off into two or three equal pieces and the metal artifact is revealed. The final step in the process is applying a patina to the metal object. This process enhances the surface by creating color through the application of various chemicals. A final coat of wax is applied to enhance and preserve the patina.

It is interesting to note that no two Dhokra art pieces can ever look the same because the mold is broken. What’s more, these object arts do not a single joint in them!

Please enter your email below and we will send you a new password.

By Signing Up , You Agree To Our Terms Of Use
Other Social Login