The Kandariya Mahadeva Mandir (Temple) is one of the most splendid religious art of the world, located in the Chhatarpur district of Madhya Pradesh, in Central India. It is the largest temple in the western group of temples of Khajuraho and is dedicated to the deity Lord Shiva, the ascetic who dwells in a mountain cave. Constructed by the King Dhangadeva, arguably one of the greatest Chandela Kings, dating back to the 1050BC, Kandariya is considered one of the best examples of temples preserved from the medieval period in India, because of which, the Archaeological Survey of India protects the temple, which is also a part of the UNESCO World Heritage site at Khajuraho. 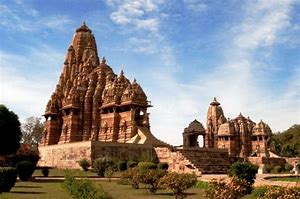 Being built around an area of 6,500 square feet and having a height of about 117 feet, the temple has been ornamented with flamboyant sculptures and highly elaborated carvings. Inside the temple, Mount Kailash, which according to the Hindu mythology is the home of Lord Shiva on the Himalaya Mountains, has been depicted by the main spire and it has a height of around 31 metres. The main spire or Shikhara, also known as the womb chamber located at the heart of the building, rises to 30.5 m to depict Mount Meru, the holy mountain of Shiva and is surrounded by 84 miniature spires, which are smaller in size and are called the Urushringas. While the whole temple is made from sandstone, along with the foundation of granite, the Shiva-linga in the inner sanctum is made from marble. The decorative artistic designs and the architecture throughout the building have been showcased in a certain Hindu iconic pattern. 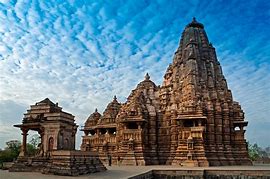 As the spiritual abode of Lord Shiva, who is regarded as the greatest deity among the sacred Shaivaites, this medieval marvel with over 870 spectacular sculptures, is one of the places you must visit, either on your religious conquest or on a search for peace or to at least admire the astounding architecture.