Mumbai city is filled to the brim with historic sights, places to visit and things to do. One of the many things Mumbai can be proud of is the Kwang Kung Temple. The Kwang Kung Temple, situated in the Mazagaon region of Mumbai is the only reminder of a Chinese community that thrived in Mumbai.

Mazagaon region served as a home to See Yup Koon community. Their roots go back to South China, they worked for the East India Company. They settled in Bombay as merchants, traders and sailors. 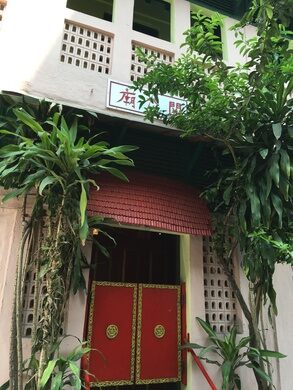 During the 1962’s Sino-Indian border dispute, few among the many Chinses residents moved back to China while some stayed on. This place was later known as China Town. Now it’s known as Dockyard Road, Mazagaon.

The Kwang Kung Temple was built over 90-years ago is a quaint temple situated between two-storey houses. Save for a red door, the exterior of the building does not indicate a temple inside the premises.

The temple is adorned with shades of scarlet, which is the auspicious colour in the Chinese tradition. Chinese paraphernalia is hung all over the temple to give it a rich vibe. There is an elegant, intricately designed alter, carved figurines to pay homage to the Chinese Gods of justice and courage, Guan Gong.

A cupboard placed on the side holds things like traditional joss sticks, paper money and Jiaobey for worshippers.

During the Chinese New Year and Moon Festival, the temple comes to life as over 500 worshippers visit the temple and gather to seek blessings. The buildings in the narrow lanes of the town bear Chinese words embossed on the doors.

Kwang Kung Temple is indeed a hidden gem in the jostling city of Mumbai where the current population prefers chill places. The vibe around Kwang Kung with its aromatic joss and the sound of the beads rolled in worship, this is indeed a place that should be visited.

Dashrath Manjhi - The Montain Man Who Moved the Mountain