Nohkalikai Falls is the tallest plunge waterfall in India. Its height is 1115 feet. The waterfall is located near Cherrapunji, one of the wettest places on Earth. They are fed by the rainwater collected on the summit of a smaller plateau and decrease in power during December&February.

According to legends, in a village called Rangjyrteh, upstream from Nohkalikai Falls, a woman named Likai resided but had to remarry after her husband’s death. Ka Likai was left with her infant daughter with no means of income. In order to sustain herself and feed her child, she had to become a porter herself. Her work required her to leave her daughter unattended for long intervals and when she would be at home she would spend most of her time taking care of her infant. She realized that raising a child required both parents, so Ka Likai married a second time for the sake of her daughter.

However, being a mother to an infant, her daughter needed constant attention so she could not give to her second husband the love he thought he deserved. A fit of jealousy grew in her husband which manifested to hatred towards Likai’s daughter. He killed the infant in cold blood and cooked her flesh after throwing away her severed head and bones to hide all trace of the murder. When Ka Likai returned home, she noticed that her house was empty and nobody was home. A meal that had been prepared but she did not find anyone around. She wanted to go look for her daughter but she was too famished from all the labour she had been doing so she ate the meal till she could not eat anymore. 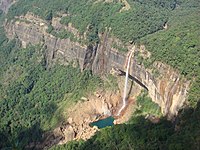 Nohkalikai Falls in the drier season.

Ka Likai usually had a betel leaf after her meals but she found a severed finger near the place where she usually cut betel nuts and betel leaves. Ka Likai realized what had happened in her absence and went mad with anger and grief and started running as she swung a hatchet in her hand. She ran off the edge of the plateau and jumped to her death as she could no longer bear the thought of cannibalizing on her dead daughter unknowingly. The waterfall where she jumped from was named Nohkalikai Falls as a grim reminder of a tragedy that befell an unfortunate woman.

The falls are often covered with fog and mist which makes it difficult at times to view the falls properly. The force of water is profuse in summer while the flow recedes in the winter to a small stream. From June to November, which is during the monsoons and post monsoons, the falls have enough water and the water flows between the rocks and the cascading waterfall presents a breathtaking sight. A viewing gallery allows the visitor to enjoy the beauty of the place. There is another interesting option for enthusiastic tourists. Tourism Department has built steps which take tourist down to various other viewing points.

The real beauty and can be experienced when one goes down at the base of the waterfall. However, it is a very tough trek from the Nongriat dobule decker root bridge to the base of Nohkalikai, followed by the climb back up the stairs to the viewing gallery. The waterfall is a delight for adventure lovers. There are many things to do when visiting the falls like trekking, camping, bird watching, photography, swimming and angling.

Air: Borjhar airport in Guwahati, about 166 km north, is the nearest airport. One can hire a taxi or board a bus to reach Nohkalikai Falls.

Road: From Guwahati, it’s a 4-hour journey to Shillong, the Capital of Meghalaya, from where it’s about 54 kms distance to Cherrapunji. From Cherrapunji’s main town its a 10 mins journey to the falls. One can also hire a taxi to reach the falls.

Train: The nearest station is Guwahati which is at a distance of 99 kms from Cherrapunjee.